Contour Roam 2 Review & Where To Buy 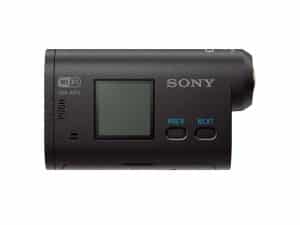 Sony has launched its first action camera to compete directly with the industry’s frontrunners GoPro, Drift and Contour, offering another tasty option for adventurous helmet camera consumers. The company actually released two models for the line up:- The HDR-AS15 and HDR-AS10.

The two cameras are identical to look at. They have the same dimensions, specs and video/photo quality, output etc. The only difference between the two Sony action cameras is that the HDR-AS15 is Wi-fi enabled and the HDR-AS10 isn’t, and is slightly higher priced.

Just to be clear, this review is about the slick Wifi enabled HDR-AS15.

Want to skip the review and check prices over at Amazon.com? Click Here

The Sony HDR-AS15 looks like a smaller and much-lightweight version of the Contour, so you could strap it on your head as comfortably as the GoPro. It weighs just over 3 ounces (and that’s including battery already!) Like most action cams, it comes with a waterproof case, which bulks it up to the size of its GoPro and Contour counterparts. The AS15 is designed to withstand bumps, scrapes and water up to 197 feet. 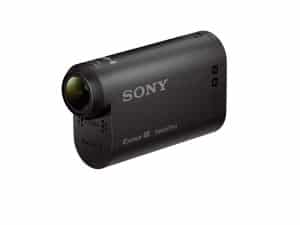 Sony’s HDR-AS15 boasts an intuitive set of controls, including the red button on the back. On one side of the AS15 is a small LCD screen that gives you feedback on settings. Below the cam, you’ll find a slot for the microphone, HDMI cable, USB, and a memory card slot that accepts up to 32 GB Memory Stick Micro and Micro SD/SDHC Memory Card (great that you have more options with memory cards since this cam has no built-in storage). A simple, yet useful feature is the removable, swappable and rechargeable battery.

Although the AS15 is geared with an ultra-wide angle Carl Zeiss Vario-Tessar lens with 170-degree view, no image rotation is available. See, this will be a problem for Sony, particularly because it’s a much-loved feature on both the Contour (that can do a 270-degree flip) and the GoPro Hero 2 (that rotates 180 degrees).

This Sony action camera runs with a Bionz processor and a back-illuminated Exmor R CMOS sensor, which provides 16-megapixel stills with enhanced clarity and better low-light sensitivity compared to both the Contour+2 and Hero 2. In terms of image sharpness, the AS15 easily beats out Contour+2, but ties with the GoPro Hero 2. 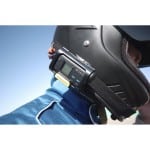 When the waterproof case is on, the only two things you can do with it is start/stop recording.

But since the Sony HDR-AS15 action camera has built-in Wi-Fi, you can use your smartphone (via PlayMemories app for Android or iOs devices) to control the cam – or use your phone as a viewfinder – and upload media from the camera to your device without the need to remove the casing. Be aware that this will only work with the HDR-AS15 model. The HDR-AS10 doesn’t come with Wi-fi which is why it’s $70 cheaper than the Wi-Fi version.

Check this test video of the HDR-AS15 with Wi-Fi… 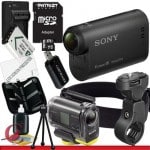 Aside from the cam, the HDR-AS15 comes with the NP-BX1 Rechargeable Lithium-Ion Battery Pack (3.6V, 1240mAh), a waterproof case, a Micro-USB cable, a flat and rounded mount with 3M adhesives, universal mount adaptor, quick release buckle and a 4GB microSD card.

There are multiple Combo Packs available that include various mounts, spare batteries, chargers and other accessories through vendors on Amazon.com so browse through to find the one that includes the bits and pieces you need.

If price is your only consideration, then the Sony HDR-AS15 wins the battle of the two similar Sony action cameras simply because it has the Wi-fi feature. It is $70 more expensive for the Wi-Fi so you will have to think if it’s worth that much to save time plugging in your HDMI cord or USB cable everytime you want to download photos/videos from it.

The price of the Sony HDR-AS15 is currently retailing at $268 and HDR-AS10 is retailing at $198. These prices are a fair chunk of coin under the leading cameras from the likes of GoPro and Contour and with specs and features to match, it may be one of the best bang for buck action cameras on the market.

Admittedly, Sony has skimped on the mounts that come with the basic package so you might want to get a combo pack or wait for Sony to release a set of accessories for its action cams. It’s good to know that Sony has plans to keep up with leaders like GoPro and Contour who have a plethora of accessories available in the market now.

With an affordable price tag and considering this is the company’s first models on its action cam line, the Sony HDR-AS15 action camera sure has some features to boast – like the rugged design, wide angle Carl Zeiss Vario-Tessar lens, SteadyShot image and stabilization. But we recommend you compare this with the Contour+2 and the recently released GoPro Hero 3 before you decide.

If you’re looking to buy online, you’ll find the best prices on the Sony HDR-AS15 and HDR-AS10 at Amazon.com which is the most trusted and reliable online retail store in the world.

Thanks for reading my review of the Sony action cameras and I hope you enjoy your new toy!