Drift Car Crash On Board Camera

GoPro has just released it’s new 3D action camera system! This is my short review on the new 3D set up from GoPro.

But unfortunately, that’s not the case. It’s NOT a new 3D camera that GoPro has released.

It’s actually a “3D kit” that you use to combine two GoPro HD Hero’s together to form a elongated 3D footage taking system.

This picture will explain it all.. 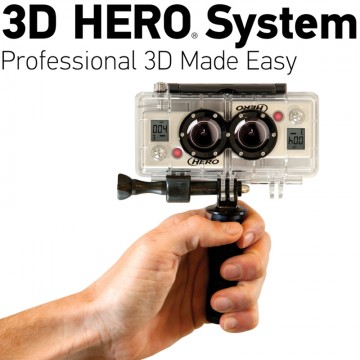 At first you think WTF.. but you’ve got to admit, this 3D GoPro set up looks pretty damn cool!

Imagine rocking up to the race track with this thing mounted on the roof of your car!

But even better, you get to watch your video back in 3D at home, upload it to Youtube or put on your blog to show off to your friends.

Just make sure everyone has a set of old-skool 3D blue and red glasses. Seriously, you need them.

In fact, if you’ve got some on you now, put them on when you watch this Gopro 3D highlights video…

It’s even better with the 3D glasses. So how would you like to record your own 3D videos like this?

The system or 3D kit includes all you need to record in professional HD 3D. You just have to have 2 HD Hero’s lying around.

You get the enlarged housing to hold the 2 cameras side by side, the connecting sync cable and some various mounts.

You will then need to download the GoPro 3D video editing software which is free here.

So for around $800, you can have your own GoPro 3D video system set up.

The cool part is that you’ll be the owner of 2 x GoPro Hero HD cameras. 2 cameras for when you want to shoot regular 2D videos from 2 different mounting positions.