The New Drift HD Action Camera – Read This BEFORE You Buy!

GoPro Australia – Where is The Best Place To Buy? 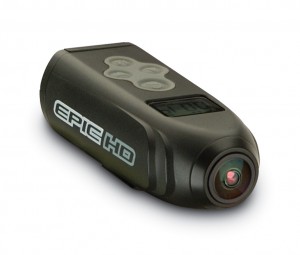 Although this brand isn’t as well known as some of the bigger brands, they have quite a decent line-up of compact action cameras.

In this review, you’re going to find out all about Stealth Cam’s Epic HD. We’ll look closely at it’s features and how they compare to other action cameras, where to buy and how much you can get it for if you decide it’s for you.

At first sight, the Epic HD action camera looks a lot like the Drift HD170 Stealth with the similar pointed nose and black casing.

LCD color screen like the Drift model for playing back your video footage.

Although there isn’t a color screen built-in, you will notice that there is a small grey and black digital display which displays your vitals like battery life, resolution and filming mode.

You’ll notice that most of the room on the screen is taken up by a “counter”, but as for what it actually counts, I’m not completely sure – recording time? time remaining, perhaps?

I’m guessing they couldn’t fit a color display on the camera because of the very small size of but they do have an attachable Epic Viewer which lets you preview and review your video and photos via a 2″ color TFT screen.

It’s hard to see just how small it is in the photos, but when you look at the dimensions, it is quite small. Much smaller in fact than many other more expensive action cameras.

To put these dimensions in perspective, it could easily fit in the palm of an adult male’s hand and he could probably be able to wrap his fingers right around it.

With the small size comes a very light weight camera. In fact, it’s light enough to mount on the brim of a baseball cap with the hat clip mount thy sell.

So it appears this is a very small action camera we’re reviewing here.

First of all, you’ll probably want to know the HD specs so here they are…

It just has this one HD setting but two lower settings which are:

It can also take still pictures at 8, 5, 1.3 Megapixels and there’s a photo burst option too which lets you choose 1 – 9 photos (per second?).

Sound is captured via an internal mic.

The lens is fairly wide at 168 degrees so there’s nothing to worry about with getting all your action in the frame.

Digital zoom goes up to 1x 2x or 4x for both video and photos.

There is 32MB of internal flash memory and it supports up to a 16 GB SD memory card.

It’s powered by 3 AAA 1.5v batteries which is a little behind in technology since most of the other big name cameras are using Li-Ion rechargeable battery packs.

AV output of the Epic Stealth HD action camera comes from a USB port to your PC (no Mac support for software).

Playback of video and preview is possible with the attachable Epic Viewer (sold separately).

Where To Buy The Epic HD Camera By Stealth

Not all online video camera retail stores are selling this camera but you can pick one up at a reasonable price via Amazon.com for around $169.

That price doesn’t include mounts or the Epic viewer so you may want to pick them up along with it if you decide the Epic HD is for you.

Although it doesn’t pack the high specs as some of the other small HD action cameras like the GoPro HERO or Drift HD, the low price makes it affordable for just about anyone, and is suitable for anyone who is looking for cheap HD video.

You can buy the Epic HD action camera safely through Amazon.com for the lowest price online. Shipping is extra at $10.99.

Remember to get mounts and other accessories with it as they are not included.

Thanks for reading my Epic Stealth HD action camera review.